The Kyoto Kokoro Initiative launched and a signing ceremony held on Apr.14, 2015

On this occasion we received support from the Inamori Foundation and started the Kyoto Kokoro Initiative. For the launch of this initiative, on April 14, 2015 a signing ceremony and a press conference were held in the guest reception room of Kyoto University Clock Tower Centennial Hall.
At the signing ceremony, Sakiko Yoshikawa (Director, Kokoro Research Center) explained the purpose of the Kyoto Kokoro Initiative, Juichi Yamagiwa (President, Kyoto University) and Kazuo Inamori (President, the Inamori Foundation) gave addresses, and a written agreement on donations was signed. During a question and answer session with journalists, Professor Toshio Kawai answered questions from journalists about the specific plans for this initiative. The events of the day were reported on the news of local television station KBS Kyoto, and were also covered by various media outlets such as Mainichi Newspaper, Kyoto Shimbun, and Nikkan Kogyo Shimbun. 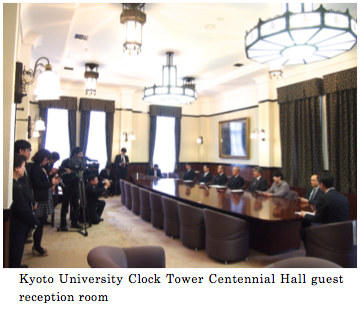 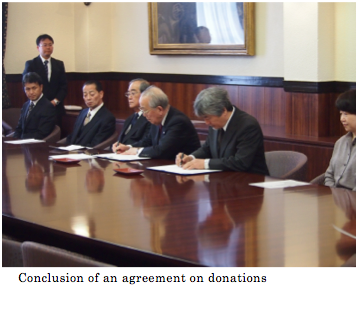 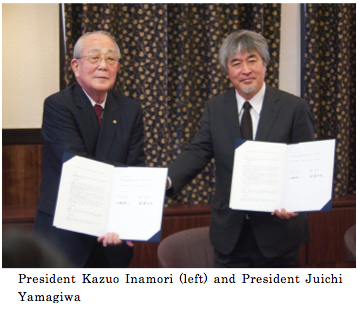 Below is the press release made by the Kokoro Research Center.

1) Purpose of the project
Advances in science and technology, the emergence of a large economic zone by globalization, and recent global environmental change are significantly changing people’s daily lives and relationships. These things are naturally affecting the state of people’s “kokoro,” and sometimes various problems are caused because their “kokoro” can’t keep up with the changes.
Rather than relying on science and technology for these circumstances or trying to resolve them by changing the environment, it may be necessary to focus on the “kokoro” of the people facing such things and carefully follow a path that leads to more essential understanding and resolution of problems.
We think that it may be necessary for us now to consider the ways that humans faced the world with the roles of “kokoro” thus far and the ways that they understood “kokoro“, explore the concept of “kokoro,” and also to clarify the roles that will be required of “kokoro” from now on.
The Kyoto Kokoro Initiative aims to question the future of “kokoro” in light of ancient “kokoro,” and to use the broad and deep nuances that are implied in the Japanese word “kokoro” in order to disseminate to the world a new understanding of “kokoro” as the Kokoro Initiative.
While utilizing the interdisciplinary research and network about “kokoro” that have been accumulated through the Kokoro Research Center’s activities since it was established in 2007, we would like to further expand and deepen them.