The First Kyoto Kokoro Initiative Symposium "Kokoro and History" was held on Sep.13, 2015

The First Kyoto Kokoro Initiative Symposium “Kokoro and History” was held at Kyoto Hotel Okura on September 13, 2015. As the first symposium of the Kyoto Kokoro Initiative that was launched in April, a focus was placed on the history of kokoro, five lecturers gave lectures in their respective fields of specializaition, and discussions were held. On the day, more than 400 participants attended. 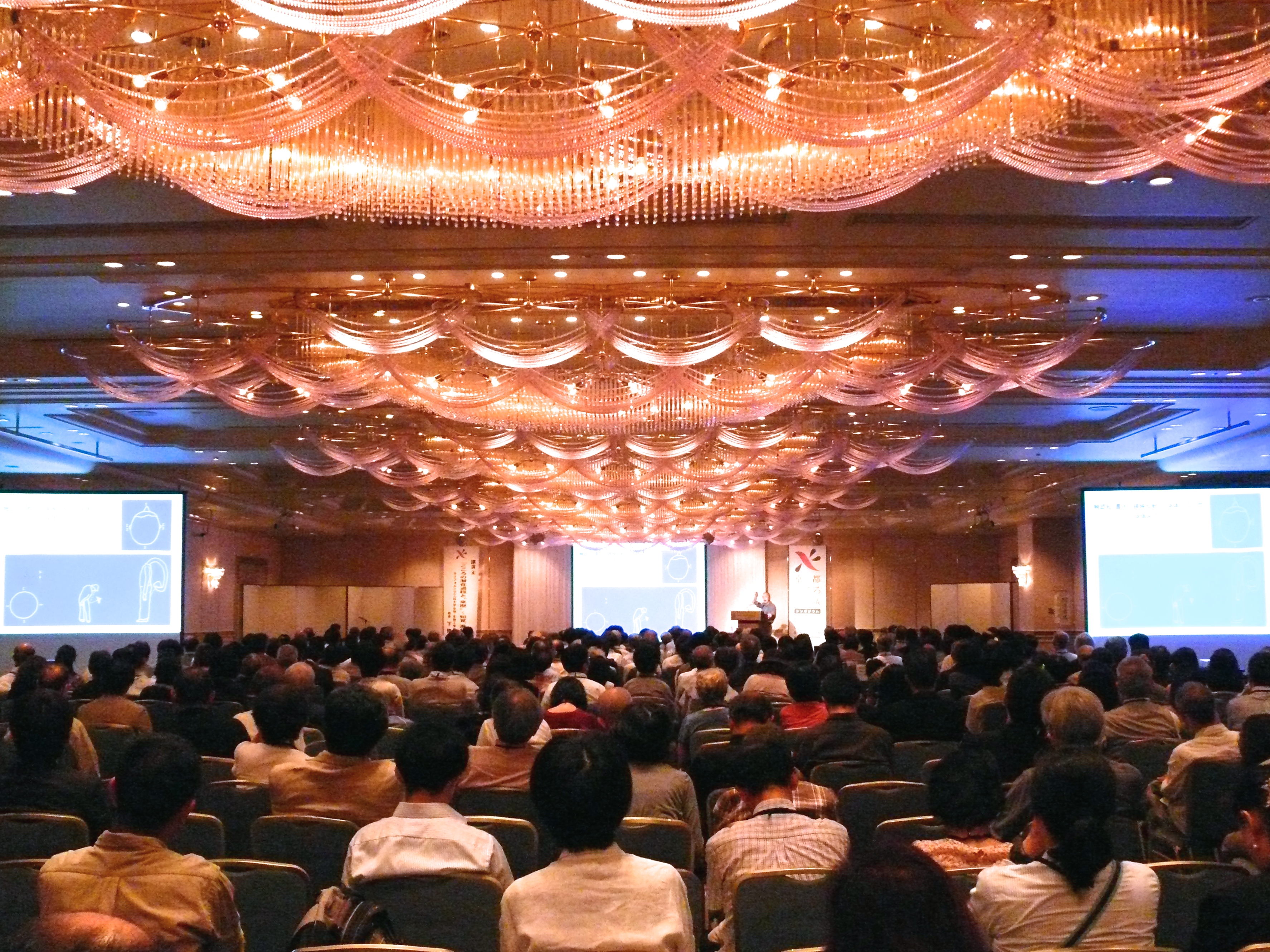 First, Sakiko Yoshikawa (Director, Kokoro Research Center, Kyoto University) introduced the background of the launch of the Kyoto Kokoro Initiative, and made the following remarks about its significance and undertakings: “I would like to clarify the richness and invaluableness of kokoro while creating relationships with large frameworks such as history, culture, nature, and the environment, and disseminate, both in Japan and throughout the world, the ideal form of a human society that cultivates abundant kokoro, as the “Kyoto Kokoro Initiative.”
Next, Kazuo Inamori (President, The Inamori Foundation) gave encouraging remarks, saying, “The Inamori Foundation has continued to conduct various undertakings with the idea that stability will first be achieved in humans’ future when there is a balance between scientific developments and spiritual evolution. I hope that this project, which reconsiders the importance of people’s kokoro and disseminates to the world the practice and suggestions for the senses of ethics and morals that have been conveyed to Japanese people since long ago, will contribute significantly to humans’ spiritual evolution from now on.”
Norifumi Ushio (Director, Scientific Research Institutes Division, Research Promotion Bureau, Ministry of Education, Culture, Sports, Science and Technology) gave the following congratulatory remarks: “The Kokoro Research Center is promoting interdisciplinary research related to kokoro that surpasses academic fields, and is actively disseminating results to society as well. Beginning this initiative now, at a time when the true abundance of kokoro is being questioned, is wonderful in terms of timing. I pray for even further development.”
After that, Shinichi Nakazawa (Chief and Professor, Institute for Primitive Science, Meiji University) gave a keynote lecture on the theme of “The Structure and History of Kokoro.” Professor Nakazawa said that, “Particularly now, it is necessary to bridge the gap between kokoro in natural science and kokoro in the humanities.” While comparing the kokoro that has been clarified by modern neuroscience and the kokoro that has been understood by the humanities, he expressed his expectations for the Kyoto Kokoro Initiative by saying that, “In the 21st century, integration of physical objects and kokoro will be an important element. From now on, the processes of the brain and the processes of kokoro will probably move towards each other and an even deeper understanding will become possible.”
Next, Toshio Kawai (Professor, Kokoro Research Center, Kyoto University) gave a lecture on the theme of “The Historical Internalization of Kokoro and Interface.” He compared Japanese people’s kokoro, which has been understood as an “open system that is connected to all including nature and other worlds,” and Western people’s kokoro, which is a “closed system that is shut in each individual” and that connects from Christianity’s prayer to psychoanalysis, and he discussed, from clinical psychology perspectives, the flow of changes toward a trend of understanding kokoro as an interface in which Internet society emerged.
In the afternoon, Yoshinori Hiroi (Professor, Facaluty of Law, Politics and Economics, Chiba University) gave a lecture on the theme of “‘Kokoro‘ and Social Design in Post-Growth Era.” While casting light on cultural historical evidence and data, Professor Hiroi, who specializes in public policy and scientific philosophy, discussed how people’s kokoro and society should respond to the change in Japan from expansion and growth to maturation and stability and also presented a vision for the ideal state of kokoro and society in the post-growth period.
After a break, Shinsuke Shimojo (Professor, Division of Biology and Biological Engineering, California Institute of Technology, and Specially Appointed Professor, Kokoro Research Center) gave a lecture on the theme of “The Implicit Process and ‘Personal History’: Perception, Evolution, Social Brain.” Professor Shimojo said about the “personal history of kokoro” concept that developed from his own research that, “personal history is an accumulation of interactions between genetics and experiences, and between the environment and the brain; it is the consequence of personal histories coming together over various time scales. It is analogous to rings of a tree, showing its life history at a glance.” He also discussed the fact that reflecting carefully on the personal histories of oneself and others will lead to clues for searching for kokoro of the future.
Lastly, Juichi Yamagiwa (President, Kyoto University) gave a lecture on the theme of “The Origin of Kokoro: From Empathy to Ethics.” Dr. Yamagiwa, who specializes in primatology, brought attention to characteristics of humans, who have a unique system that is the opposite of other primates, in that they hide their sexual acts but eat publicly. Concerning the origins of the kokoro of people behind the complicated human society, he used various videos and data to show the results of research on primates such as gorillas, and he discussed the significance of comparative research for understanding kokoro.
After that, a general discussion was conducted by the five lecturers, and Toji Kamata (Professor, Kokoro Research Center, Kyoto University) said the following as summarizing comments: “This has been a productive time for the front runners of knowledge to consider kokoro from various angles.” In relation to Japanese people’s kokoro and animism, he introduced the lyrics of “Ringo no Uta (The Apple Song),” which was popular after World War II. He said that, “I have expectations for the development of future discussions at the Kyoto Kokoro Initiative concerning the possibilities that lie in Japan’s animism, which even found kokoro in apples.”
To close the symposium, Nagahiro Minato (Executive Vice-President, Kyoto University) gave the following closing remarks: “Kyoto University has many, more than 20, laboratories and research centers, and of those the Kokoro Research Center is the smallest center, but it is conducting research on kokoro, which is the biggest thing. We expect that from now on the research surrounding kokoro will develop in a way that will lead to guideposts for individuals and society.”
We plan to publish the content of the lectures that were given at this First Kyoto Kokoro Initiative Symposium as a book. We also plan to hold the Kyoto Kokoro Initiative International Symposium in 2016. 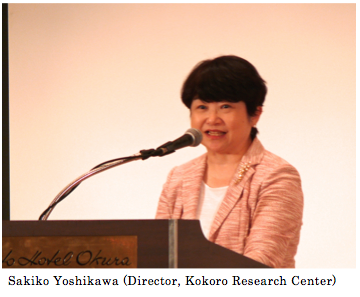 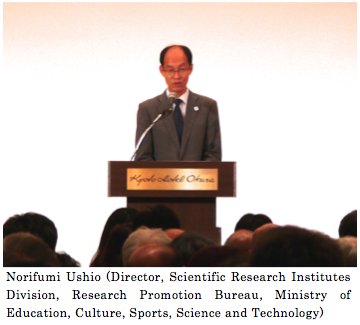 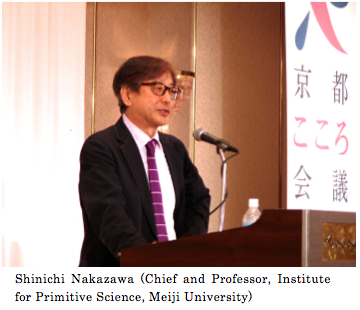 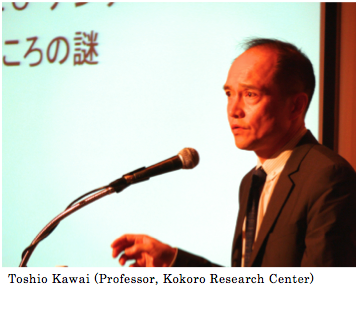 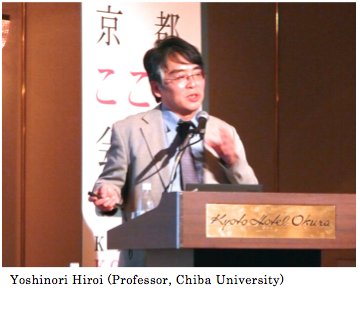 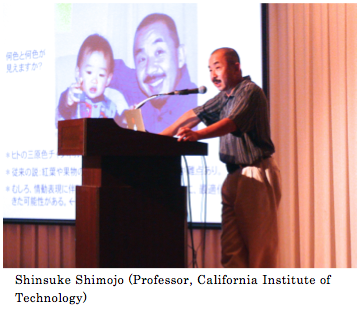 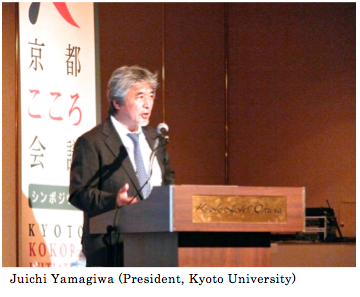 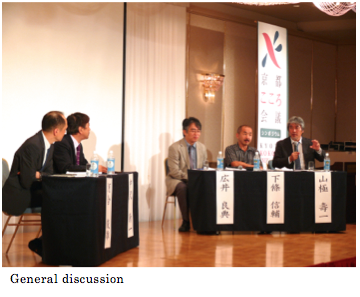 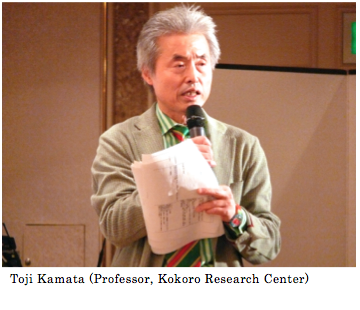 [Poster about the symposium] 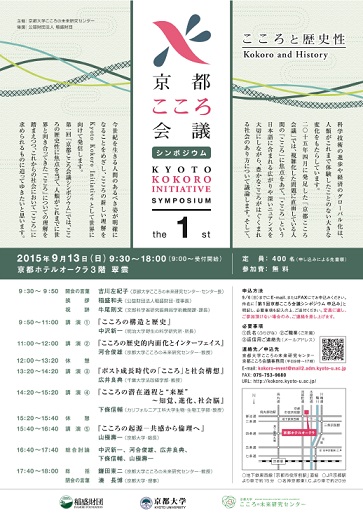