Dr. Abe’s Research Introduced in the English and Japanese Issue of “National Geographic”

Dr. Nobuhito Abe received both English and Japanese coverage in the June 2017 issue of the “National Geographic” in the article, “Why We Lie”.
From common white lies to deception in educational background and identity to dishonesty in the world of politics and business, lying is a human trait.  This phenomenon has attracted many researchers across the world and throughout the ages. This edition addresses the history of human dishonesty, the reason why humans lie and “the science behind our complicated relationship with the truth” (National Geographic, June 2017)
The issue referenced Assoc. Prof. Abe’s fMRI research on honesty and dishonesty that has shown that there is a close relationship between lying and reward processing in the brain. 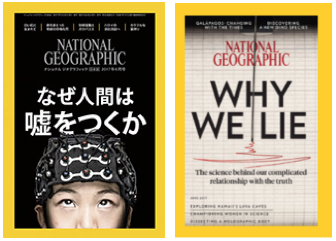 Why We Lie
Psychologists Nobuhito Abe at Kyoto University and Joshua Greene at Harvard University scanned the brains of subjects using functional magnetic resonance imaging (fMRI) and found that those who acted dishonestly showed greater activation in the nucleus accumbens–a structure in the basal forebrain that plays a key role in reward processing. “The more excited your reward system gets at the possibility of getting money–even in a perfectly honest context–the more likely you are to cheat,” …
（Excerpt from the Article）