Dr. Seiji Kumagai‘s book, Bhutan: The Kingdom Aiming for the Happiness of its People, was published by Sogensha in July 2017. 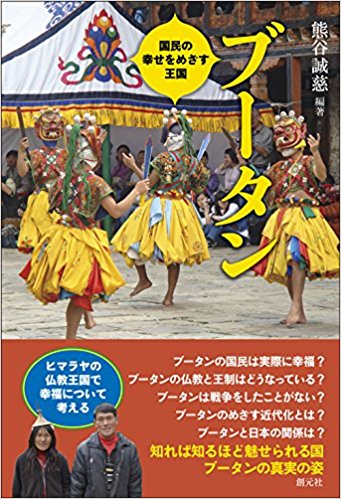 Ever since the Bhutanese King and Queen’s visit in 2011, Japan has shown an increasing interest in Bhutan. In 2017, the Japanese Princess Mako of Akishino made news when she visited Bhutan.
Bhutan is well known as the country whose public policies aim not just for material prosperity, but also for the happiness of its people.
It’s Gross National Happiness(GNH) policies have drawn attention from the UN. In Japan, those policies have had significant effects, inspiring nearly one hundred local governments to form “The Happiness League” which is centered in Tokyo’s Arakawa Ward.
However, are the Bhutanese really happy? Do conflicts arise despite the country’s Buddhist policies? How are they balancing such policies with the modernization of the country? Dr. Kumagai’s book introduces various largely undiscussed realities of Bhutan that can be instructive for the future Japanese policies, such as the relationship between the economy and happiness, the leadership’s way of implementing policies.