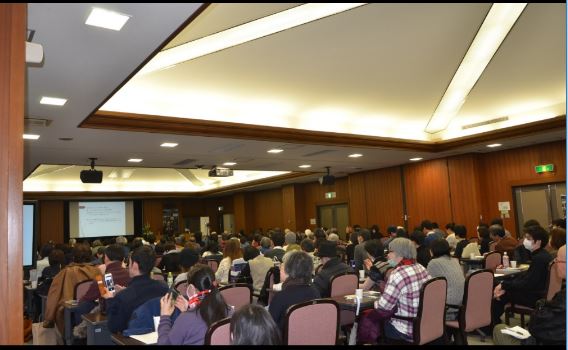 On this snowy day, the enthusiasm of those in attendance filled the symposium. Prof. Kawai gave his lecture in the second part, followed by Prof. Shinichi Nakazawa (Institut pour la Science Sauvage, Meiij University). Prof. Kawai discussed the Kegon perspective through the lens of Jungian psychology and its meaning for Japanese people. For example, the concept of “all is in one” is both fundamental principle of Kegon and an idea familiar to many Japanese people, which makes sandplay therapy meaningful to them. Building a box garden not only creates a piece of art but also reflects one’s kokoro and soul in the form of the garden.
In the third part of the symposium, all the lecturers participated in a discussion. One of the core topics was how Japanese people tend to connect with objects without symbolic intervention. In the West, sandplay therapy was developed based on symbolic interpretation, whereas in Japan, the placement of objects in itself has a therapeutic function. Another topic of discussion focused on how something comes out of nothing. At the end, the attendees expressed their wishes for similar symposia to be held in the future.
Event Information