An Essay by Prof. Kawai Entitled, "Hayao Kawai: Gone with the Mountain Bonfire (Okuribi)" Published in the 8/17/18 Edition of the Kyoto Shimbun Newspaper as Part of its "Sophia" Series 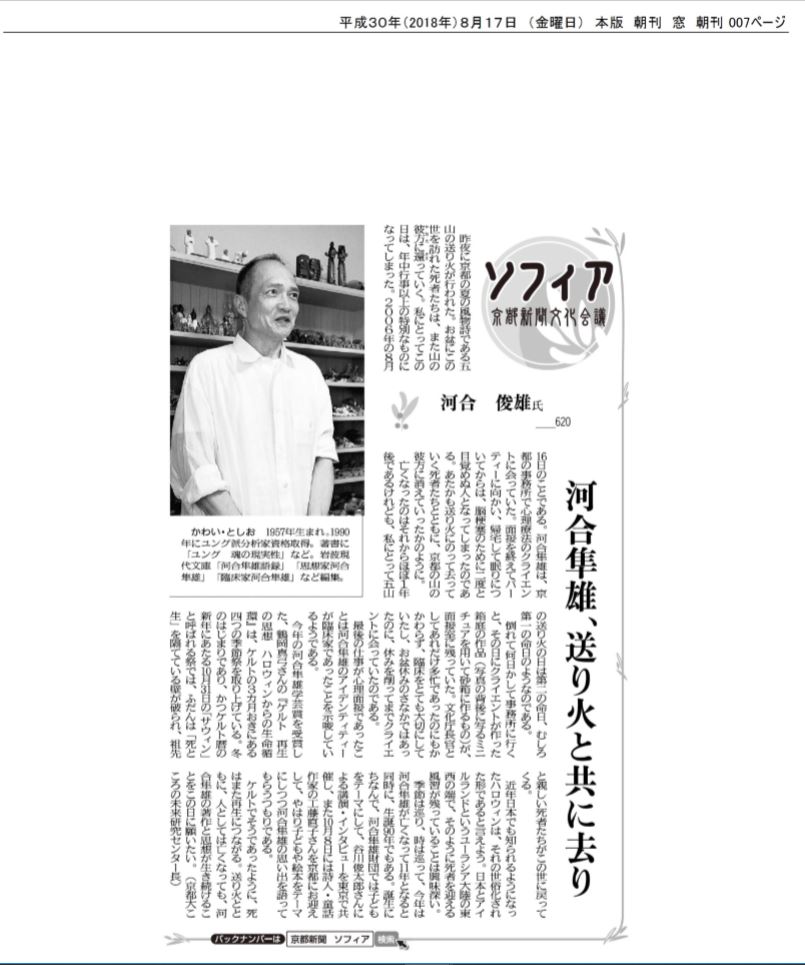 Last night was the night of Gozan no Okuribi (bonfires on five mountains to send off the souls of the deceased), which is an annual summer event in Kyoto. On this night, the soul of the deceased ancestors, who came back to visit this world during the obon period, go back to the other world over the mountains. For me, the day of the Gozan no Okuribi has a significance that goes beyond that of an annual tradition. It was August 16th, 2006. Hayao Kawai went to see a client at his office. Afterwards, he went to a party, came home and went to bed. He had a stroke and never woke up again. It felt as if he disappeared over the mountains of Kyoto with all other deceased souls when the bonfire was lit.

Although he did not pass away for almost another year, I consider the day of Okuribi to be the anniversary of his passing, not the day of his actual passing.

When I went to his office a few days after his stroke, I found some sand-play box work made by a client (the miniature figures seen behind me in the picture are used in a sand box therapy). He valued his clinical practice so much that he went out of his way to make time in his busy schedule to see a client.

That his last work was a psychotherapy session indicates how much he identified himself as a practitioner.

Mayumi Tsuruoka, who won this year’s Hayao Kawai Prize, discusses the four Celtic seasonal festivals in her “Celts: Thoughts on Rebirth and the Life Cycle from Halloween”. On October 31, which is the new year festival “Samhain” in the Celtic calendar, deceased ancestors and loved ones come back to this world, taking down the wall between death and life. Halloween, which has become familiar to the Japanese, is a secular form of Samhain. It is interesting that a custom of welcoming back the deceased is still practiced in Japan and Ireland, which are located on the eastern-most and western-most of Eurasia.

This year marks the eleventh year since Hayao Kawai passed away, and he would have been 90 if he were around. To commemorate it, the Kawai Foundation held a lecture and interview with Shuntaro Tanikawa in Tokyo. The foundation will invite Naoko Kudo, a poet and fairy tale author, to talk about Hayao Kawai with regards to children’s books and picture books in Kyoto on October 8th.

As is in Celtic thought, death is connected to rebirth. When one dies, their presence leaves with the bonfire. However, I hope that the books and ideas of Hayao Kawai will live on.
(8/17/2018 Excerpt from Kyoto Shimbun Newspaper)