The second Kyoto Kokoro Initiative Workshop was held at the Inamori Center on April 3rd, 2019. The theme for this year’s Kokoro Initiative, which will take place on the 14th of October, is “Kokoro and the Artificial Mind” (tentative title). At the workshop, Masaki Fujihata, a renowned Japanese media artist, presented a paper entitled, “Media Art as Prosthesis”. 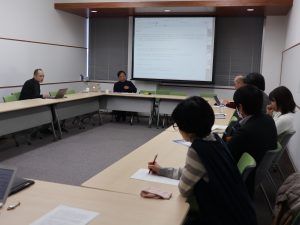 Mr. Fujihata observed that the importance of technology, or art, is often overlooked when considering the question of what constitutes humans. He proposed that we reconsider technology as a “prosthesis” that is essentially inseparable from humans. Using the examples of perspective and photography, Mr. Fujihata demonstrated how the ways in which we see objects have adapted to technological inventions. He pointed out that today the history of visual art struggles to attend to the new forms of “image” produced by recent technology. Later in the talk, Mr. Fujihata presented some of his recent works to demonstrate the modes of “image” in actual media art.

During the discussion that followed, some participants suggested that people’s discourses about dreams vary according to the technology they frequently use, such as color television and religious beliefs. The audience and the speaker then discussed the relationship between technology and human cognitive abilities.