Prof. Toshio Kawai wrote a commentary for the paperback edition of ‘Cosmos and Anticosmos’ written by Dr. Toshihiko Izutsu.

Cosmos and Anticosmos: For Eastern Philosophy, one of the important works by Toshihiko Izutsu, was published as part of the Iwanami paperback series in May 2019. For the paperback edition, Prof. Kawai wrote a commentary entitled “Commentary – Toward a Real Live Eastern Philosophy.” The book includes several papers by Izutsu in which interpreted Eastern philosophy and Huayan (Kegon) philosophy from the perspective of modern philosophy, as well as discussions he had with the historical novelist Ryotaro Shiba.

First, Prof. Toshio Kawai explained that an original point of view can be found in Izutsu’s understanding of Eastern thought: the structure of real world we that experience is stratified, and a different view of the world will emerge if we deepen our consciousness. Another attractive feature of Izutsu’s works, according to Prof. Kawai, is that his understanding of Eastern thought was based on his experiences in ascetic practice and meditation. Also, Izutsu introduced various Eastern thoughts by presenting them in relation to current intellectual and situational issues.

Regarding the article “Cosmos and Anticosmos,” which provides the title for this book, Prof. Kawai focused on Izutsu’s attempt to consider Eastern philosophy using Western philosophy’s concept of “Cosmos”, postulating that there is “nothing” at the bottom of reality that we can recognize as real, and this “nothingness” includes an abundance that is the source of life and existence. Prof. Kawai pointed out that the “nothingness” of Eastern philosophy overlaps with insights that Jung and Hayao Kawai had based on their own experiences.

Regarding the opening article “Non-obstruction between Phenomena / Non-obstruction between Principles – After the Dismantling of Existence,” Prof. Kawai commented on the originality of Izutsu, who tried to read the Huayan philosophy of the Huayan Sutra from the perspective of the Islamic philosopher, Ibn Arabi. Prof. Kawai also observed that there is a closeness between the thoughts of Ibn Arabi and Jung on the point of assuming that the concept of “Archetype” lies midway between the above-mentioned “nothingness” and the real world. In addition, Prof. Kawai addressed Jung’s ideas on “constellation” or “synchronicity”, which he based on his own experiences of accidental events he encountered during his practice of psychotherapy that lacked causal explanations. Based on this, Prof. Kawai thought that Jung might have experienced the “nothingness” of Kegon philosophy, which describes the interpenetration of all things in depth.

Prof. Kawai also considers the ontology of Eastern philosophy from time theory or the human image of Zen in Izutsu’s other papers. Looking at the ideas of the zen priests Dogen and Rinzai, we can find Izutsu’s very existential viewpoint, which emphasizes “I” as “a real live person.” It is said that in Eastern philosophy, time is a continuous series of innumerable independent moments that includes the entirety of time. Therefore, Izutsu thought that historical philosophy has meaning for the present, said Prof. Kawai. For example, psychotherapists today often refer Izutsu’s books in when considering how developmental disorders have rapidly increased since the year 2000. Prof. Kawai concluded his commentary by stating that since Izutsu’s works were written to convey ancient ideas to present-day audiences, they will continue to be important. 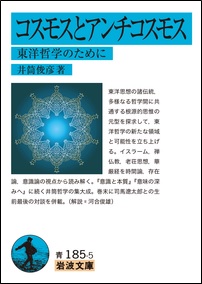