Prof. Tetsuya Ogata Presents at the Fifth Workshop for the 2019 Kyoto Kokoro Initiative 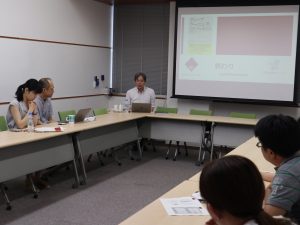 He first described the technology of deep learning, an inductive artificial intelligence that has made remarkable progress in recent years, as opposed to traditional deductive artificial intelligence. After introducing several examples of robots using this deep learning technology, it was shown that the central issue of robot research, as mentioned above, is how to constructively understand and reproduce the mechanisms in which cognitive processes appear in physical behaviour. As an example, the results of an experiment that examined the physical behaviour of robots based on the comparison of two cognitive processes, top-down and bottom-up, were reported.

During the discussion, technical questions were posed about the robot technology and deep learning that Prof. Ogata introduced.  Furthermore, opinions on how to motivate robots, self-preservation, and the possibility of using robots to study the characteristics of autistic spectrum disorder (ASD) were actively exchanged.