Prof. Toru Nishigaki Presents at the Sixth Workshop for the 2019 Kyoto Kokoro Initiative

The sixth Kyoto Kokoro Initiative Workshop was held at the Inamori Center on September 24th, 2019. The theme for this year’s Kyoto Kokoro Initiative, which took place on the 14th of October, was “Kokoro and Artificial Mind.” Prof. Toru Nishigaki (Professor Emeritus, The University of Tokyo) presented a paper entitled “The Future of Kokoro in the AI Era.” 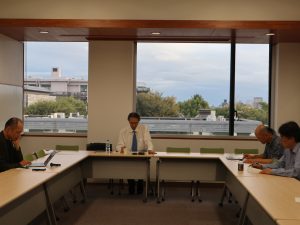 He first examined the concept of “autonomy,” which regulates organisms, by posing the question of whether or not autonomy can be recognized in machines, such as artificial intelligence.

With invoking ideas like autopoiesis, he described that it would be difficult for AI to understand meaning, while organisms continue to create a world of meaning.

In conclusion, Prof. Nishigaki pointed out that it would be difficult to say that AI is autonomous, and that it would be important to identify where the responsibility lies when we apply AI.