An article based on an interview with Professor Yukiko Uchida was published in the “Kouron” column of the Asahi Shimbun newspaper.

An article based on an interview with Prof. Yukiko Uchida regarding her research on happiness was published in the “Kouron” column of the Asahi Shimbun’s morning edition on October 3, 2019. 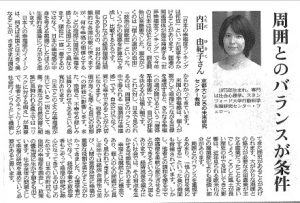 (This article is in the paid version of the Asahi Shimbun site.)

Prof. Uchida compares the levels of happiness found in Japan and the United States. In the United States, happiness is often based on personal achievement, whereas in Japan, happiness is based on being in balance with the people around you. In Japan, she says, other people’s evaluations affect people’s sense of well-being, and many people have a sense that happiness and unhappiness exist side-by-side. These cultural influences have persisted, despite recent environmental changes. She argues that it is important to discuss happiness, not only as a phenomenon of individual minds, but also as a social phenomenon.