The Textbook, ‘Momo’ written by Michael Ende, Was Published in the August Edition of NHK’s Hyappun de Meicho (“100 Minutes on a Famous Book”) Series

Prof. Toshio Kawai’s textbook, ‘Momo’ written by Michael Ende, was published in the August edition of NHK’s Hyappun de Meicho (“100 minutes on a famous book”) Series. In conjunction with the textbook, The TV program on NHK’s E-TV hosts guest speakers to discuss famous books from various genres. In the August broadcast, Prof. Toshio Kawai will discuss Momo, written by Michael Ende, a well-known German writer of fantasy and children’s fiction.

The textbook summarizes the four August broadcasts in which Prof. Kawai discusses the following themes: “Momo is in Everyone’s Heart!,” “The Men in Grey; Thieves of Time,” “Time is Life,” and “From ‘Passive’ to ‘Active’”.

Prof. Kawai first explains his clinical standpoint as one that tries to get down to the depth of the psyche from what is expressed in a “story” as well as in dream or sandplay work. Then, he goes on to discuss the story of Momo and mentions that this work still provides us with a deeper insight into the world and an opportunity to feel a new way of life.

As Prof. Kawai touches upon another theme in which the main character Momo stands up as the subject at the end of the story, he considers that adults can also learn about life from a good fantasy story. 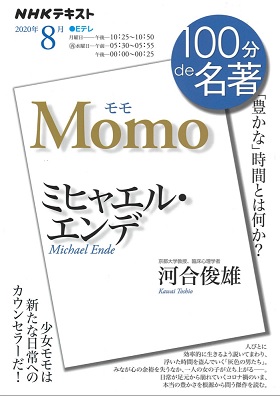