This book is a transcript of Jung’s lectures during his first academic year at Swiss Federal Institute of Technology (ETH) in Zurich, where he was appointed as a private lecturer again and gave lectures from 1933 to 1941, after having left the University of Zurich. As the translated book was published in Japan, Prof. Kawai supervised the translation and wrote the foreword.

In the foreword, he notes that Jung was interested in dissociation, and that the central methodology described in this book was based on his two case studies showing a dissociative phenomenon; a dream becoming a reality or being possessed by a spirit.

In pre-modern times, psychological problems were projected onto external things, for example, objects and stars in astrology, or answers provided by religion. In modern times, however, people began to think of each person as a subject with internal psychological problems. Prof. Kawai considers this as the birth of modern psychology. Therefore, to be possessed by a spirit was also treated as a symptom in modern times. However, Prof. Kawai argues that the process of “thinking of <I> within,” which Jung regarded as the characteristic of modern psychology, is inevitably linked to having a relationship with the unconscious, something completely different from I.

As these lectures were open to the public, Jung discussed his psychology without much use of his own terms and theories. Taking this into account, Prof. Kawai concludes his forward by saying that he expects the book will provide an opportunity to review Jung’s writings and ideas and discover new aspects of them.

・On the publisher’s book page, you can read the forward by the supervisor Toshio Kawai, the foreword by Ulrich Hoerni, a grandson of C. G. Jung, and the first lecture (Only in Japanese).
https://www.sogensha.co.jp/tachiyomi/4114 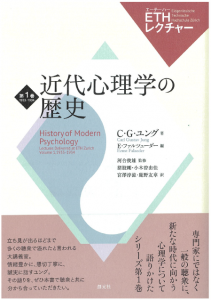