An interview with Professor Yoshinori Hiroi appeared in the morning edition of the Yomiuri Shimbun dated August 9, 2020.

An interview with Prof. Yoshinori Hiroi appeared in the morning edition of the Yomiuri Shimbun dated August 9, 2020. In the article entitled “Can we move toward a sustainable society?”, Prof. Hiroi regards the Showa period as “the era of group climbing,” but after having reached the top of the mountain, there comes an age where visibility is 360 degrees open and each person exhibits one’s individuality and creativity in various ways. The Reiwa period will be such an era, he says.

From the perspective of human history, Prof. Hiroi states that the transition from expansion and growth to sustainability is not “boring,” but indicates an era of creativity. In addition, based on the results of simulations using AI, the development of urban policies in Germany and on the trend “locally-oriented” among young people in recent years, Prof. Hiroi says that such an age will build a structure that is spatially “decentralized.” At the same time, he discusses the meaning of “Chinju no Mori (the groves of village shrine)” as a hub for local revitalization and local communities. 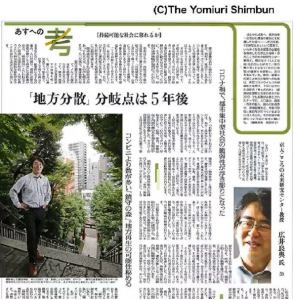 The morning edition of the Yomiuri Shimbun（August 9, 2020）