Prof. Sayaka Ogawa Presents at the Second Workshop for the 2020 Kyoto Kokoro Initiative 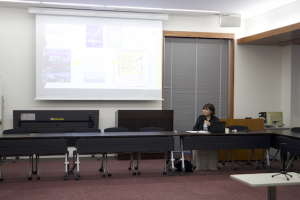 The second workshop for the 2020 Kyoto Kokoro Initiative was held at the Inamori Center on August 19, 2020. The theme of this year’s Kyoto Kokoro Initiative is “Kokoro in Critical Situations”. Prof. Sayaka Ogawa (Professor, Graduate School of Core Ethics and Frontier Sciences, Ritsumeikan University) presented a paper entitled “Lies and Laughter in Difficulties – The Urbanized Population in Tanzania.”

In the presentation, Prof. Ogawa presented an episode of her participatory observation as an old clothes peddler in Tanzania and discussed a characteristic of peddlers called “ujanja” (cleverness/cunning) . According to Prof. Ogawa, peddlers, who are said to have an excellent “ujanja,” acquire “débrouillage” as a tactic to get through difficult situations . Many people think that when being pushed into a corner, people would show their real faces instantly, but peddlers try to overcome their difficulties by repeating ludicrous lies and performances that could even arouse laughter.

Using the theory proposed by Japanese philosopher Megumi Sakabe, Prof. Ogawa pointed out that what can be found in the behavior of Tanzanian merchants is a world-view based on improvisational “metamorphosis,” which is different from the modern view of self based on the dichotomy between the real face and a mask.

In the discussion, the following topics involving social background issues were actively discussed: differences in the mode of laughing between cultural areas such as the West, Africa and Japan; the difference in cultural backgrounds such as settlement and migration types urban and rural areas, and the presence of natural disasters or lack thereof; and the differences arising from religion.