The classic bestseller book ‘Midlife Crisis’ written by Hayao Kawai, on which Professor Toshio Kawai wrote a commentary, has been renamed and published

This book written by Hayao Kawai was originally published as a work of the paperback edition series by the Asahi Shimbun Company in 1996. Because it was renamed (subtle changes in the Japanese title) and published this time, Prof. Toshio Kawai wrote a commentary entitled “Midlife Crisis and the Narrative.”

In this book, Hayao Kawai focuses on the problems of middle age that emerged from a Japanese literary work contained in each chapter. In the commentary, Prof. Toshio Kawai describes the method of “speaking through a literary work” that Hayao Kawai adopted in his work; twelve novels were featured in this book, and Hayao Kawai made comments on individual stories, such as a case study group of psychotherapy, overlaying his daily and clinical experiences.

In addition, Prof. Toshio Kawai refers to the epoch in which the selected novels were written. He points out that there is a big difference between the nature of time in those novels and that of our time when people can easily become someone else on the Internet and fixed relationships are easily lost. Using examples of such novels, Prof. Kawai considers that they were influenced by the nature of modern age, namely that, “there is a conflict due to invisible limitations, but there is also a place which encloses the whole,” which helped to deepen the psychological drama in each novel. 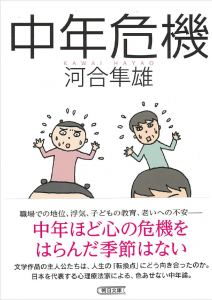