Professor Kawai’s essay, “The Encounter and Darkness in Murakami’s New Book ‘First-Person Singular’” was published in the literary magazine Shincho

Professor Toshio Kawai’s essay “The Encounter and Darkness in Murakami’s New Book ‘First-Person Singular’” was published in the October 2020 issue of the literary magazine Shincho.

In this article, Prof. Kawai discusses the collection of short stories entitled ‘First-Person Singular’ that Haruki Murakami recently published in July 2020, and bases his discussion on some of the works included in the collection.

First, he points out that “a momentary encounter that is different from everyday relations” is depicted in all of the short stories. In contrast to Haruki Murakami’s previous works, which deal with the theme of missing or unfulfilled love, in this work, deep encounters, however fleeting, are fulfilled, and the art pieces intervening in these encounters are not the “narrative” that Murakami previously had been emphasizing, but are rather momentary pieces, such as Tanka (thirty-one syllabled verse), poetry and music.

Since an encounter is such a momentary one, a parting accompanies it, or there is only a fine line between an encounter and a missed encounter. Touching on this, Prof. Kawai discusses the works and says it should be noted that some of them depict the situation as “a missed encounter which leads to a new one.” From a passage in one of those works, “having a number of centers and no outer circumference,” Prof. Kawai associates our “kokoro’s layers of history” and states that as there are many centers we don’t know, it would be possible to encounter all people far deeper in the soul, instead of pursuing “a fixed thing,” such as an eternal woman or god as seen in classical literature. At the end of his essay, Prof. Kawai describes how it is interesting that some works in this new book also show the duality of encounter as not always wonderful, but sometimes frightening. 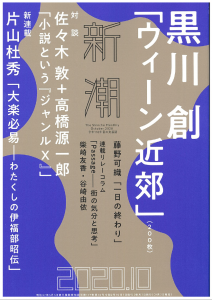