Record of the symposium, in which Professor Shinichi Nakazawa served as the keynote speaker and Professor Toshio Kawai as the designated speaker, has been published in the first issue of volume 33 of Archives of Sandplay Therapy

A record of the symposium held on November 16, 2019 in Kyoto, in which Professor Shinichi Nakazawa served as the keynote speaker and Professor Toshio Kawai as the designated speaker, has been published in the first issue of volume 33 of Archives of Sandplay Therapy. 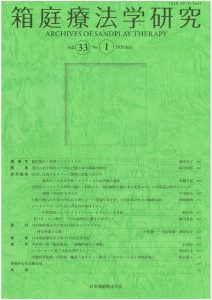 The symposium was held under the theme of “Hayao Kawai and Buddhism.” In the first half, Prof. Shinichi Nakazawa gave a keynote speech, and in the second half, he discussed the contents of his lecture with designated speaker, Prof. Toshio Kawai.

In the keynote speech, touching on his own study of Tibetan Buddhism as well as his exchanges with Prof. Hayao Kawai, Prof. Nakazawa specified that Prof. Hayao Kawai focused his attention on Buddhism, especially on “Huayan Sutra” and “Mahāyāna śraddhotpādaśāstra,” in order to understand a “kokoro of Japanese” that is different from Westerners, and to derive a new psychology with universality that can encompass not only the kokoro of Asian and Japanese people, but also that of Western people.

Prof. Nakazawa explained the difference of kokoro between East and West based on his archaeological knowledge, functions of kokoro, such as “Logos” and “Lemma”, and the mental structure depicted in Huayan Sutra. In addition, Prof. Hayao Kawai’s thought, which explored the possibility that Buddhism could also embrace the kokoro of the West through universality, was presented clearly by Prof. Nakazawa.

In the following discussion, Prof. Nakazawa and Prof. Kawai discussed a wide range of topics, including Nordic regionality, seclusion, etc, based on archaeological knowledge and the ideas of Huayan Sutra. Prof. Kawai especially raised the topic of “narrative and time,” because Prof. Hayao Kawai had been trying to think about kokoro through “narrative” in his later years. Regarding this topic, Prof. Nakazawa first pointed out that the purpose of “mythology,” the prototype of story, is to take our kokoro to a place where there is neither time nor space, and to bring it back after visiting a kind of other  world. In the process, a reversal of values will happen and this leads to a new world. In response to this story, Prof. Kawai further advanced the discussion by stating that this could be seen as crossing the boundary between life and death, or between consciousness and unconsciousness, which would be of great meaning.