This book is a translation of the entire book ‘The Soul’s Code: In Search of Character and Calling’ by James Hillman, a well-known Jungian psychotherapist. It was first translated by Ryuji Kagami and published in 1998 and has now been republished by Asahi Shimbun Publications. For the republished version, Prof. Toshio Kawai has written a commentary entitled “Acorns and Daimon.”

Prof. Kawai mentions that Hillman emphasized the collective unconsciousness, which is common to cultures and humanity beyond the individual unconsciousness, even more than other psychotherapists whose background is in Jungian psychology. Then, he explains Hillman’s “acorn theory,” which states that “we are born with an acorn inside us,” which is to say that Hillman thought our personalities and problems are not determined by our genetics or past experiences. Although the book was not written as a psychological treatise, Prof. Kawai exposits that such a thought overlaps with the “autonomy of the soul” that Hillman emphasized in his own psychology. Using examples of real people, Hillman shows that this acorn is associated with evil and violence as well as a wealth of talent or ability, and he considers how to deal with the acorn inside us.

Prof. Kawai touches on the depth of Hillman’s argument in this book and discusses it from the perspective of a psychotherapist himself, connecting it to his clinical experiences of psychotherapy; the fact that a child’s acorn remains undestroyed even in the midst of their tragic upbringing, the importance of a person (or persons) who can find and share acorns, and the state of modern culture in which many people hide their acorns in modesty. 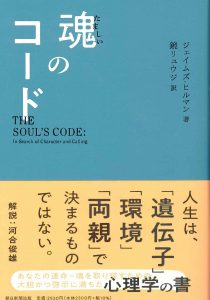