A translation of Analytical Psychology: Notes of the Seminar Given in 1925: The Beginning of Jung’s Psychology that was supervised by Prof. Toshio Kawai has been published

Prof. Toshio Kawai supervised the translation of Analytical Psychology: Notes of the Seminar Given in 1925: The Beginning of Jung’s Psychology, which was published by Sogen-sha in June, 2019.

The book is a compilation of notes of Jung’s 1925 seminars in Zurich, which were published in 1989 and in a 2012 Philemon series. Professor Kawai supervised the translation and wrote the foreword for the Japanese translation.

Prof. Kawai also noted that Jung conducted the seminar in English for the public, and had selected many of his own dreams for interpretation. This episode tells us Jung’s desire to communicate his experiences and theories to many people, and also shows how much value he placed in the reality of dreams and images.

According to Prof. Kawai, the book’s contents are highly reliable and important because Jung himself checked them and some of them were quoted by his secretary, Aniela Yaffe, when she edited Memories, Dreams, Reflections, which is known as Jung’s autobiography. It is said that many of the students in this seminar were women and they asked many questions from the female perspective. Noting this, Prof. Kawai commented that the contents of this book also raises the question of how Jungian theory can be used today to examine topics such as globalism and LGBT. 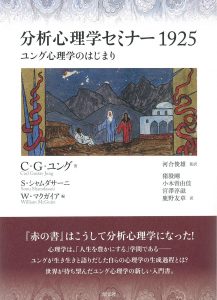 Title: Analytical Psychology: Notes of the Seminar Given in 1925: The Beginning of Jung’s Psychology