23rd Seminar on Bhutan (Families and Livelihoods in Pre-modern Bhutan) 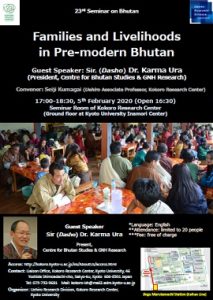 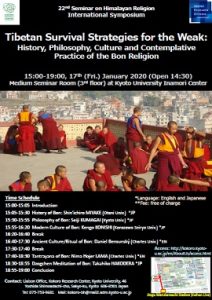 The department of Bhutanese Studies, Uehiro Research Division at Kokoro Research Center has regularly organized Seminars on Himalayan Religion. In the 22nd Seminar, we will hold the International Symposium: “Tibetan Survival Strategies for the Weak: History, Philosophy, Culture and Contemplative Practice of the Bon Religion”.

Though Tibet is worldly famous for being a Buddhist country, the existence of an earlier indigenous religion known as Bon is often unnoticed by non-specialists. Bon became a minority religion in the 8th century when Buddhism turned into the state religion of Tibet. Despite unfavorable circumstances, including direct repression a times, Bon has been able to survive throughout the centuries resorting to clever and peaceful strategies. This religion might provide us with some clues on how to survive in this current hard-to-live world. The symposium examines the history, philosophy, culture and contemplative practice of the Bon Religion to learn “Tibetan Survival Strategies for the Weak”.

Bhutan, a Himalayan kingdom whose national focus is on creating “Gross National Happiness,” has a variety of cultures and languages.

As a result of its national policy regarding English language education, many Bhutanese people can speak English. However, their national language is Dzongkha, which is used in important speeches and documents.

In this seminar, which was held September 17 – 21, 2019, the participants learned the basic grammar of Dzongkha and engaged in simple conversations.

Qualifications for taking courses: none required but priority was given to applicants who had completed Tibetan grammar and could attend each class session.

21st Seminar on Himalayan Religion (To Be a Shaman among the Sherdukpens, West-Kameng District, Arunachal Pradesh) among the Shertukpens)

Tentative title: To Be a Shaman among the Sherdukpens, West-Kameng District, Arunachal Pradesh.

The Sherdukpens or more accurately Sertukpens, are a population of about 4,000 who live in West Kameng district in the State of Arunachal Pradesh (“The Land of Dawn-Lit Mountains”), located in North-East India. They are referred to as Buddhists in the Indian census.

Buddhism was introduced among Sherdukpens in the mid-18th century. Today there are small Buddhist temples, stūpas, and prayer walls in almost every village. Most Sherdukpens have Buddhist names and, for funerals, they call upon Buddhist monks and married priests who, for the most part, are natives of Bhutan or the Tawang region. In fact, up until the last decade, there were no Sherdukpens among the Buddhist clergy. It was obviously not their concern.

Today Buddhism is still considered a foreign religion, quite different from the local religion which is qualified by those who speak English as “naturalistic” because all the gods, spirits, and demons inhabit elements of the landscape: mountains, forests, rocks, rivers, caves, and so forth. These invisible forces fall into two broad categories: good or potentially benevolent spirits, referred to as lo and including ancestral deities (khiks), and evil spirits or demons called dẽ. Associated with dẽ because of their malicious power and the fear they spread, bising are spectral figures whose appearance and size change at whim.

Three religious experts are responsible for smoothing out any difficulties in the cohabitation between spirits and men, and sometimes among men themselves through the intervention of a spirit:

– khikzizis, who are priests dedicated to cults of ancestral deities (khiks) and carry out community rituals;

– zizis, who are household priests and perform rituals centered on the individual and the family; and

It is the last of these who interest me here and to whom I’ll be devoting my lecture. I’ll be describing how one doesn’t decide to be a raoma – one is ‘caught’ by a deity –, and I’ll be recounting a séance I was lucky to attend, backed by photos and videos. The raoma is not just an intercessor; he travels to the nonhuman world to meet the spirits, to talk to them and even fight them. Only his “bodily envelope” stays in the house where he operates.

The department of Bhutanese Studies, Uehiro Research Division at Kokoro Research Center has regularly organized Seminars on Himalayan Religion. In the 20th Seminar, our guest speaker Prof. Dr. Klaus Dieter Mathes will give a lecture about the four signs of Mahāmudrā meditation of Kagyu tradition of Tibetan Buddhism. German artist Ms. Dagmar Mathes will talk about doing art with traditional Nepalese Lokta paper.

Abstract: Handmade from plant-fibers, lokta paper matches my preference for natural working material and has shaped the expression of my paintings.

Abstract: In his commentary on Saraha’s Peoples’ Dohās (dMangs do hā), Karma Phrin las pa (1456-1539) repeatedly comments on various subjects in terms of the “four signs” (brda bzhi) of Mahāmudrā meditation, i.e., mindfulness (dran pa), beyond mindfulness (dran med), non-arising (skye med), and transcending the intellect (blo ‘das). Of particular interest is Karma Phrin las pa’s four sign interpretation of Saraha’s dohā on gaṇacakra, which prescribes the four tantric activities of “(1) eating, (2) drinking, (3) union, and (4) filling the cakras.” According to Karma Phrin las pa’s secret explanation, one eats the perceived object (grāhya) through mindfulness, drinks the perceiving mind (grāhaka) through leaving mindfulness behind, and enjoys union with emptiness through non-arising. The result of this profound deconstruction, the transcending of the intellect, allows for the emergence of co-emergent wisdom. It will be shown that the Karma Phrin las pa’s repetitive topic of the four signs has its origin in literature attributed to Maitrīpa (986-1063) and his disciple Pha dam pa Sangs rgyas.

Tentative title: The Nature and Role of Consciousness in the Tibetan Great Perfection (Dzogchen) Philosophy

This lecture will focus on the nature and role of consciousness in the philosophy of the Great Perfection (Dzogchen) tradition of the Ancient (Nyingma) school of Tibetan Buddhism. The Dzogchen philosophy of mind rests on a principal distinction between dualistic mind (sems) and primordial awareness (ye shes) which the tradition has deemed indispensable for understanding its distinctive views and practices. After considering how some of the tradition’s leading scholars characterized mind and primordial awareness in relation to Chinese and Indian Buddhist traditions during the post-Imperium Era of Fragmentation (9th–10th centuries), we will look at how it came to be regarded as a defining element of Dzogchen thought and practice. To this end, we will look at some of the key philosophical arguments that were used to justify the distinction in the classical period (12th to 14th centuries). The lecture concludes with an exploration of how the distinction was used in Dzogchen path hermeneutics to reconcile traditional gradualist and non-gradualist models of the Buddhist path and briefly considers some of its implications for contemporary studies of consciousness.

The department of Bhutanese Studies, Uehiro Research Division at Kokoro Research
Center has regularly organized “Seminars on Bhutan” and “Seminars on Himalayan
Religion”. In the 21 st Seminar on Bhutan, Dr. Seiji Kumagai will give a lecture on
Bhutan’s modern society.

13th Lecture on Bhutanese Culture (The Clash between Modernization and Tradition in Bhutan) *with a Partial Preview of the Documentary Film “The Next Guardian”
The department of Bhutanese Studies (Uehiro Research Division) at Kokoro research Center has regularly organized Lectures of Bhutanese Culture. In the 13th Lecture and Workshop, the honorable guest speakers Mr. Arun Bhattarai and Ms. Dorottya Zurbo (Movie Directors) will talk about the clash between modernization and tradition, especially about their documentary film “The Next Guardian” focusing on the intergenerational gap in Bhutan, including discussion with discussants. 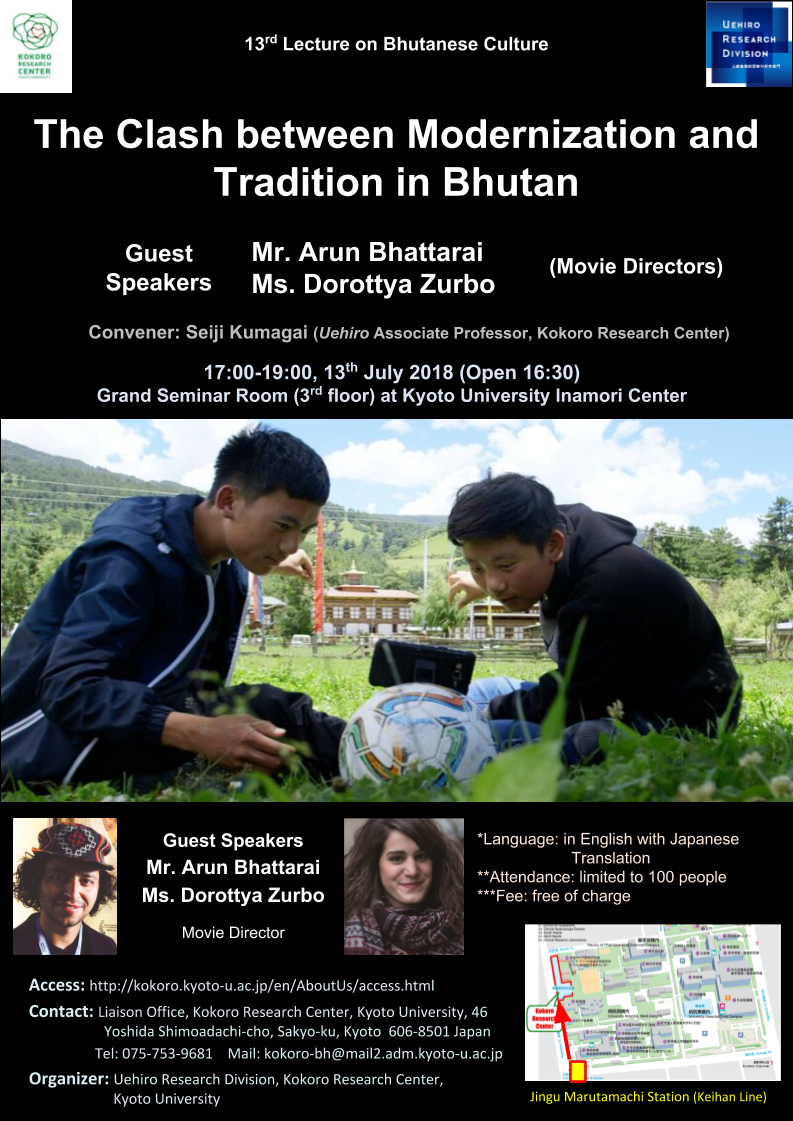 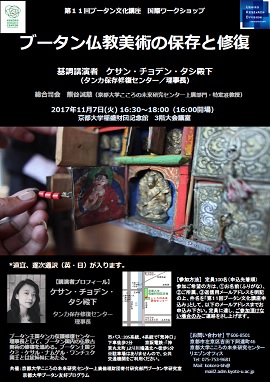 Japanese Buddhism for Beginners:
Hasshu Koyo (Compendium of the Buddhist Teachings)
Full – not accepting applications as of 9/11/17 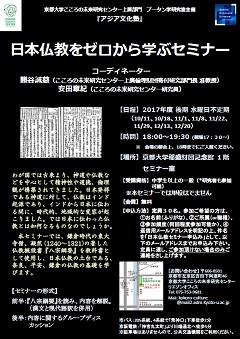 Japanese spirituality, morality, and ethics have evolved around and been influenced by Shintoism and Buddhism since antiquity. Unlike Shintoism, which originated in Japan, Buddhism underwent various transformations in its passage from India to Japan. What is current Japanese Buddhism like?
In this seminar, attendees will learn the basics of Japanese Buddhism of Nara, Heian and Kamakura eras using the Hasshu Koyo by monk, Gyonen (1240-1321) from Todaiji Temple in the Kamakura era as a textbook.
The first half of each seminar will focus on reading the Hasshu Koyo in both the classical kanbun style and the modern Japanese.
The second half of each meeting will focus on group discussions. Although this is a beginner level seminar, attendees with previous knowledge on the subject are welcome to attend.
Dates: Wednesdays in the Fall 2017 semester: 10/11, 10/18, 11/1, 11/8, 11/22, 11/29, 12/13, 12/20
Time: 18:00-19:30
Location: Kyoto University’s Inamori Foundation Center, 1st Floor Seminar Room
Fee: Free of Charge
Coordinators: Dr. Seiji Kumagai and Dr. Akinori Yasuda
Sponsored by the Kokoro Research Center, The Uehiro Foundation on Ethics and Education’s Bhutanese Studies Research Laboratory

17th Seminar on Bhutan “Monarchy And Democracy in Bhutan” / Thurs. 21 July 2016 [Date] Thurs. 21 July 2016
[Time] 17:00-18:30
[Place] Small Seminar Room 1 (3rd floor) at Kyoto University Inamori Center
(46 Shimoadachi-cho, Yoshida Sakyo-ku, Kyoto)
http://kokoro.kyoto-u.ac.jp/en/AboutUs/access.html
[Speaker] Karma Tenzin (Researh Fellow, The Center for Southeast Asian Studies, Kyoto University)
[Title] Monarchy And Democracy in Bhutan
[Abstract] Bhutan became one of the youngest democracies in the world when it conducted its first parliamentary elections on March 24, 2008, bringing an end to 100 years of absolute monarchy. This transformation of a hermit kingdom, isolated from the rest of the world for the better part of its recent history and ruled by four generations of successive monarchs since 1907, is indeed a milestone. Surprisingly, it was the very institution of monarchy, in particular the fourth King of Bhutan who spearheaded the democratic process, which ultimately paved way for the 2008 parliamentary elections. Eight years on, people of Bhutan seem to have embraced democracy in true spirit, despite their initial reservation/misgiving about the whole political transition from absolute monarchy to constitutional democracy. The national assembly and the national council are taking the lead in formulating policies, local government elections have empowered people at the grassroots, encouraging them to actively participate in the decision making process, and free press have created a platform for the people to closely follow – and if need be criticize the activities of the government – bringing transparency and accountability. The institution of monarchy is still at the center of Bhutan’s new found polity and its popularity has been growing by the day. What makes Bhutan’s democracy unique has been argued by many scholars. Hence, I would like to talk about Bhutan’s journey into parliamentary democracy and the role of the king in this new governance, the role of the king and the constitutional provisions guiding the institution of monarchy.
*Open to Researchers and Students **Free of charge