Lecture Summary:
Possibility of Sustainable Welfare Societies: Integration of Social Policy and Environmental Policy in the Post-growth Society
Welfare state models in the latter half of the 20th Century presupposed the continuous economic growth, and have been constructed on the assumption that economic growth and increasing income equality are mutually reinforcing. But currently, as most of the industrialized countries are experiencing chronical economic stagnations owing to the maturation of consumptions and more fundamentally, the finite nature of natural resources and environments in the global level are being recognized, welfare state models combined with the continuous economic growth are put into question.
In such a context emerges the concept of “sustainable welfare society,” which means that the concept and discourse of “sustainability” should be incorporated into the discussions and policy paradigms of social policy. This also means that the integrations of social policies which deal with distributional justice and environmental policies which deal with sustainability of human economic activities should be in some way or other designed and pursued.
The concept of sustainability has multiple dimensions and among them, 1) environmental sustainability under the conditions of finite natural resources, 2) financial or institutional sustainability of social protection systems, 3) demographic and inter-generational sustainability in the times of aging population and population decrease, 4) sustainability of work or employment in the age of innovation are included. And when we look at the present situation of Japan, whose current administration having the “growth-maniac” orientations, all of these dimensions of sustainability are placed in jeopardy.
Based upon such concerns and conceptual frameworks, and drawing on some international comparisons and historical evolutions of capitalism, I will explore the possibility of sustainable welfare societies as well as policies to be taken, and draw some implications for the East Asian societies.
Lecture Material: 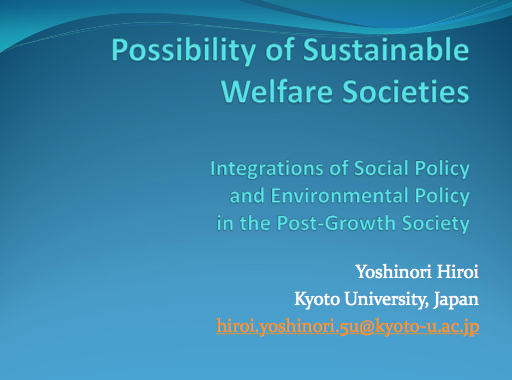