An interview with Associate Professor Seiji Kumagai (Divisional Director, Uehiro Research Division for Ethics and Spirituality) appeared in the Bunkajiho, a newspaper specializing in religion (March 8, 2022, page 2). He was interviewed regarding the withdrawal of operations by the Jodo Shinshu Hongwanji sect at the Asoka Vihara Hospital (Joyo City, Kyoto Prefecture), a stand-alone palliative care hospital.

The hospital opened 10 years ago as a Buddhist hospice, but the Jodo Shinshu Hongwanji sect, the governing body of the hospital, decided to withdraw from the operation. In the interview article, Prof. Kumagai states that while the withdrawal from the operation itself is regrettable, there are many aspects of the past challenges and achievements to date that should be evaluated. He also argues that the accumulation of these achievements, including the issues involved, could be passed on to future generations, leading to significant social contributions. 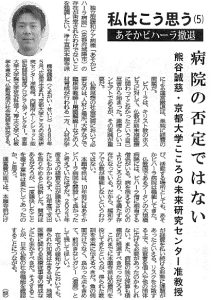 *Click on the image to view the newspaper article (in Japanese, PDF).