The original version of this book was published in English as ‘Dreams, Myths & Fairy Tales in Japan,’ based on five lectures Prof. Toshio Kawai gave at the Elanos Conference from 1983 to 1988. In 2013 it was translated into Japanese and published in a collection called ‘Iwanami Gendai Zensho’ entitled『日本人の心を解く－夢・神話・物語の深層へ』. Now, the book has been newly included in the Iwanami Gendai Bunko series and the title has been changed to 『夢・神話・物語と日本人 エラノス会議講演録』 (Dreams, Myths, Fairy Tales and the Japanese: Lectures at the Elanos Conference).

The book ends with a commentary by the translator, Prof. Toshio Kawai, titled “Core Thought of Hayao Kawai and the Impact: In Lieu of a Translator’s Afterword for the New Edition in Iwanami Gendai Bunko.”

In the commentary, Prof. Toshio Kawai first states that this book is very useful for understanding the essence of Prof. Hayao Kawai’s thought, because each chapter is connected to several major works written later in his career. While working on the new edition for Iwanami Gendai Bunko, Prof. Toshio Kawai read the previous version again and found that its contents overlap with various current research and clinical cases. There is significance in this book, in that it may bring us new discoveries in our contemporary and future society. 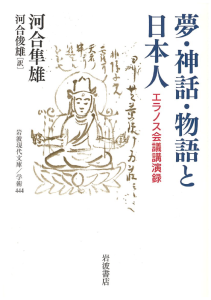