Professor Toshio Kawai wrote a foreword for the republication of the book, Hayao Kawai and the Eyes of a Child: Messages from “The Rabbit Hole”

In the foreword for the new edition, “Preface: The Eyes of a Child, the Eyes of a Therapist”, Professor Toshio Kawai focuses on Hayao Kawai’s unique view that children’s literature shows the world through “the eyes of a child.” That is, the intriguing worlds depicted in those works capture a deeper reality that cannot been seen from “the eyes of common sense” or “the eyes of an adult.” He says that because Hayao Kawai used his therapist’s eyes to read children’s literature, he could grasp the deep world that can be seen through children’s eyes.

In the foreword, he noted that Hayao Kawai repeatedly emphasized the importance of the age of ten, a time when children experience transcendence and leave their parents for their own world. Thus, we can trace his way of reading children’s literature, which makes this new edition a significant contribution to understanding Hayao Kawai’s way of thinking. 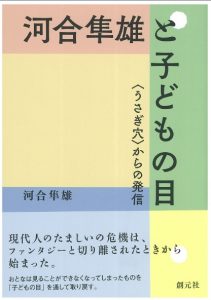 Hayao Kawai and the Eyes of a Child: Messages from “The Rabbit Hole”

The Book Page on Web: https://www.sogensha.co.jp/productlist/detail?id=3999