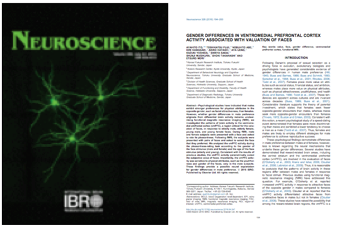 Ito A, Fujii T, Abe N, Kawasaki I, Hayashi A, Ueno A, Yoshida K, Sakai S, Mugikura S, Takahashi S, Mori E (2016)
Gender differences in ventromedial prefrontal cortex activity associated with valuation of faces
Neuroscience 328: 194-200
http://www.sciencedirect.com/science/article/pii/S0306452216301324 ※認証有り
○Abstract
Psychological studies have indicated that males exhibit stronger preferences for physical attributes in the opposite gender, such as facial attractiveness, than females. However, whether gender differences in mate preference originate from differential brain activity remains unclear. Using functional magnetic resonance imaging (fMRI), we investigated the patterns of brain activity in the ventromedial prefrontal cortex (vmPFC), a region critical for the valuation of faces, in response to elderly male, elderly female, young male, and young female faces. During fMRI, male and female subjects were presented with a face and asked to rate its pleasantness. Following fMRI, the subjects were presented with pairs of faces and asked to select the face that they preferred. We analyzed the vmPFC activity during the pleasantness-rating task according to the gender of the face stimulus (male and female) and the age of the face stimulus (elderly and young). Consistent with the results of previous studies, the vmPFC activity parametrically coded the subjective value of faces. Importantly, the vmPFC activity was sensitive to physical attributes, such as the youthfulness and gender of the faces, only in the male subjects. These findings provide a possible neural explanation for gender differences in mate preference.