Prof. Yoshioka Presents at the First Workshop for the 2019 Kyoto kokoro Initiative

The first Kyoto Kokoro Initiative Workshop was held at the Inamori Center on March 13, 2019. The theme of this year’s symposium, which will take place on the 14th of October, is “Kokoro and the Artificial Mind”(tentative title). Prof. Yoshioka from the Kokoro Research Center presented a paper entitled, “The mind, ‘artificial’ or ‘artistic’? The Eccentric Relationship between Kokoro and Art”. 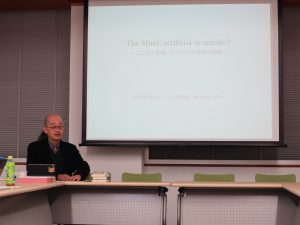 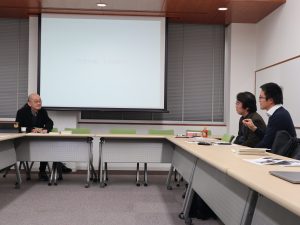 Prof. Yoshioka reviewed the Kantian concepts of “nature” and “art” to propose that “the natural” and “the artificial” interpenetrate, rather than oppose, each other. Using examples from Japanese contemporary art, he compared the Japanese cultural climate, in which the natural and the artificial conspicuously permeate each other, with that of the West. In Western culture, the term “artistic” conveys a positive value, whereas the term “artificial” has historically connoted people’s fear and anxiety about man-made objects, as epitomized by the iconic image of Frankenstein. Subsequently, Prof. Yoshioka posed the question of whether or not artificial intelligence can overcome humans. He asserted that human beings are themselves already a form of artificial intelligence, in the sense that the most human activities in the rational and perceptible realms, including art, are forms of artificial intelligence. Prof. Yoshioka concluded, however, that the above question itself becomes nonsensical if we consider the human “artistic mind” as that which reacts to imperceptible non-existence. During the discussion that followed, some participants raised questions regarding where the difference between the human “artistic mind” and today’s growing Deep Learning technology (in particular, Deep Dream) lies. Later, the audience and the speaker discussed various instances of Japanese culture—ranging from plastic surgery, to iPS cells, to traditional puppet theatre, to the peculiar definition of a maestro as “unskilled”—that seem to encapsulate the complementary relationship between art and nature, further exploring the differences between Japan and other cultures. (Reported by: Mori Nakatani, Research Assistant)