Prof. Kawai’s Essay Series Published in the May 2018 Issue of Minerva Correspondence: Kiwameru

Prof. Toshio Kawai‘s essay series “Kokoro’s Forefront and Layers of History” was published in the May 2018 issue of Minerva Correspondence: Kiwameru. 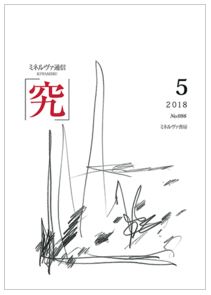 Previously in this series, I have written about psychosomatic and developmental disorders. In this section, I would like to focus on symptoms. Dissociative disorder includes depersonalization disorder, dissociative amnesia and dissociative identity disorder. The ICD-10 added hysteria (convertible disorder) to this category. Modern psychiatric medical diagnostic classification was established by Emil Kraepelin in 1899. Around the same time, Sigmund Freud began developing his psychoanalytic theories and techniques. This is how the framework for modern psychiatry and psychotherapy were developed…