Hayao Kawai: A Thinker, which was co-edited by Prof. Toshio Kawai, has been re-printed in paperback.
Along with Hayao Kawai: A Clinician, which was published last month, a reissue of the book, Hayao Kawai: A Thinker has been released by Iwanami Shoten Publishers to commemorate the work of Hayao Kawai.
Having specialized in psychotherapy, Hayao Kawai drew from mythology and folklore in his numerous books on the essence of kokoro and the kokoro of the Japanese people.
Prof. Toshio Kawai highlights Hayao Kawai’s role as a “thinker” in the book, capturing the depth of his thoughts in easy-to-read writings that extend beyond the framework of psychology.
In the book, Hayao Kawai’s writing are analyzed and discussed by experts from various fields, such as Prof. Shinichi Nakazawa, Prof. Kiyokazu Washida, Prof. Norio Akasaka and Prof. Takeshi Yoro.
One change to this edition is the addition of “On Hayao Kawai’s ‘Folklore and the Kokoro of the Japanese'” by Prof. Masachi Osawa, who was awarded the 3rd Hayao Kawai prize in 2015. One other change is the addition of “Reading Guide: 10 books for learning about Hayai Kawai’s thoughts”.
In “The Hollow Structure and the Demon Child”, Prof. Toshio Kawai cites Hayao Kawai’s concept of “the hollow structure in Japanese mythology”, which reflects the method of psychotherapy that he consciously used in his practice. According to Prof. Toshio Kawai, this “hollow structure” was the core of Hayao Kawai’s philosophy of practice.
On the other hand, the fact that Hayao Kawai was also interested in “the demon child” and “re-reading Hiruko” reminds us that he embraced not only “the hollow structure”, but also “the demon child who was forced out of the hollow structure”. Along with such folk tales, the impact of Myoe, Kegon and Kegon philosophy on the formation of Hayao Kawai’s core beliefs needs to be highlighted.
In the section, “Reading Guide: 10 books for learning about Hayai Kawai’s focuses on introducing his thoughts via keywords, such as Jungian Psychology and psychotherapy, tales, Buddhism and children.
Further, because learning about his life and who he was as a person is crucial to discussion of his thoughts, the book also includes biographical information on Hayao Kawai, a series of his essays and interviews with him.
(Commentary in Japanese by Hisae Konakawa, Research Fellow) 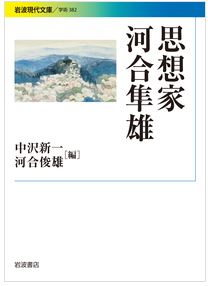