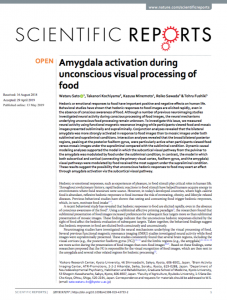 ○Abstract
Hedonic or emotional responses to food have important positive and negative effects on human life. Behavioral studies have shown that hedonic responses to food images are elicited rapidly, even in the absence of conscious awareness of food. Although a number of previous neuroimaging studies investigated neural activity during conscious processing of food images, the neural mechanisms underlying unconscious food processing remain unknown. To investigate this issue, we measured neural activity using functional magnetic resonance imaging while participants viewed food and mosaic images presented subliminally and supraliminally. Conjunction analyses revealed that the bilateral amygdala was more strongly activated in response to food images than to mosaic images under both subliminal and supraliminal conditions. Interaction analyses revealed that the broad bilateral posterior regions, peaking at the posterior fusiform gyrus, were particularly active when participants viewed food versus mosaic images under the supraliminal compared with the subliminal condition. Dynamic causal modeling analyses supported the model in which the subcortical visual pathway from the pulvinar to the amygdala was modulated by food under the subliminal condition; in contrast, the model in which both subcortical and cortical (connecting the primary visual cortex, fusiform gyrus, and the amygdala) visual pathways were modulated by food received the most support under the supraliminal condition. These results suggest the possibility that unconscious hedonic responses to food may exert an effect through amygdala activation via the subcortical visual pathway.