Kyoto University’s KRC Uehiro Research Division’s 2019 Research Report Meeting was held at the Inamori Center on December 15th, 2019. This year’s meeting included research reports and discussions centered around the theme of “Kokoro in the Age of SNS.” 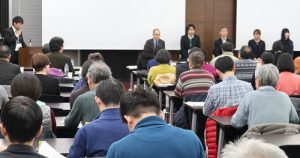 Today, many people regularly use social networking services (SNS). Given this, the 2019 Research Report Meeting presented researches from various disciplines attempting to understand of how kokoro is changing today. A full house was in attendance. 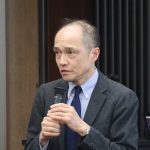 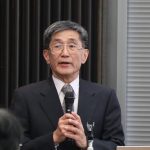 The opening remarks were given by Prof. Toshio Kawai (Director, KRC), followed by a welcome speech by Mr. Shinichi Ohara (Operations Director, the Uehiro Foundation on Ethics Education). Prof. Yoshinori Hiroi (Vice Director, KRC) then discussed the division’s basic mission and reported on his social contribution activities, such as giving a symposium lecture commemorating the first anniversary of the Korea Local Government Council. He also discussed his research regarding the post-growth age, when peoples’ interests are shifting towards sustainability and happiness, with the keywords being the separation and reunion of “economics and ethics”.

Prof. Hiroi’s presentation was followed by two other research presentations, one by Seiji Kumagai (Associate Professor) and another by Aya Seike (Senior Lecturer).

Dr. Seike discussed how research on the current super-aging society is usually applied by giving presentations on research findings and problem-solving methods, or by developing intervention strategies. Such research findings can contribute to society, such as by developing awareness-raising activities and policy recommendations. To illustrate this, she showed the results of policy trends, surveys and randomized trials regarding the development of educational methods that can foster a culture of end-of-life care and effective stress management methods for people with dementia and their families. She concluded by introducing possible directions for future research based on her results.

Prof. Kumagai reported on his international activities, including assisting in imperial diplomatic relations between Bhutan and Japan. He also presented the results of his research on Asian spirituality, happiness, and ethics, including a comparative study of the philosophical history of kokoro-views in Buddhism and bon (an indigenous Himalayan religion) and a historical and philosophical study on Bhutan’s Gross National Happiness (GNH) policy. 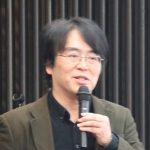 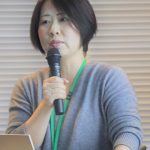 In the second half of the event, there was a panel discussion comprising three presentations entitled, “Viewing the Consciousness of Our Time from the Perspective of LINE Counseling”, followed by a discussion. Prof. Kawai acted as moderator and Prof. Keiko Iwamiya (Human Sciences Department, Shimane University) as commentator.

The first speaker was Dr. Chihiro Hatanaka (Senior Lecturer), whose presentation was entitled “The Consciousness of Our Time and Kokoro in the Age of SNS.” She presented data and clinical cases covering several perspectives on how LINE, one of the most widespread social networking services in Japan, was able to penetrate society’s kokoro so quickly. At first glance, because it seems that people spit out their current situation or mood on LINE, one would expect their kokoro would to be divided or unstuck. But, she proposed, SNS is no longer “outside” one’s kokoro. Rather, the inside and outside of kokoro might have already become seamless.

Next, Prof. Yasushi Sugihara (Director, Center for Student Services, Kyoto University) gave a presentation outlining LINE-counseling project. Since the launch of the LINE-counseling service, he has acted as an academic advisor for many workplaces. He discussed the history of LINE-counseling and its initial difficulties, as well as it performs. Particularly impressive was the process showed with the simulated cases to see how clients’ kokoro was affected by the client-therapist dialogue.

The third speaker was Dr. Masataka Nakayama (Assistant Professor). He provided an analysis and interpretation of more than 1000 anonymized cases in his presentation, “A Data Analysis of the LINE-Counseling Project.” Although case studies are the primary methodology in the clinical psychology, the contents of such studies are not openly available to the public. The emergence of a format that can handle big data, like LINE-counseling, has opened up the possibility for deeper analysis from a cognitive science perspective in a form that guarantees anonymity. 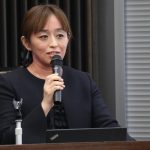 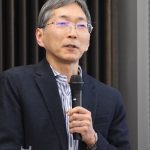 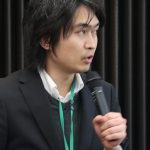 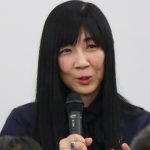 After these three presentations, Prof. Kawai and Prof. Iwamiya joined the discussion. They discussed how, although people may think that counseling via LINE might be trivial, many users of LINE-counselling, including the younger generation, are able to talk effectively about their problems. This suggests that the tool (LINE) and its ability to offer limited consultations fit the kokoro of contemporary people.

The topics of discussion included SNS and contemporary consciousness, and the union of empirical research and clinical practice. One audience member asked whether or not a life force could be weakening today. The panel commented that, if one looks at the deeper, rather than the superficial effects of SNS, our psyche may have remained unchanged, though on the surface, it would be difficult to see this.