Prof. Miho Ishii Presents at the Fourth Workshop for the 2020 Kyoto Kokoro Initiative

The fourth workshop of the 2020 Kyoto Kokoro Initiative was held at the Inamori Center on October 28th, 2020. The theme for this year’s Kyoto Kokoro Initiative is “Kokoro in Critical Situations”. Prof. Miho Ishii (Associate Professor, Institute for Research in Humanities, Kyoto University) presented a paper entitled “Possession and Pathos – From a Cultural Anthropological Perspective.” Five people attended the workshop and 11 people participated through a simultaneous webcast on Zoom. 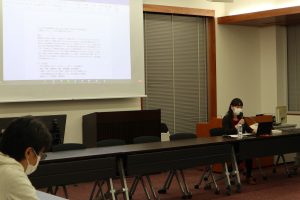 Prof. Ishii first took up the anthropological discussion over possession. In particular, as a perspective alternative to functionalism or ontological anthropology, she proposed that a new approach might be created by linking the concept of pathos by Victor von Weizsäcker with the concept of the middle voice. According to Prof. Ishii, redefining possession as the state that Indo-European languages have expressed using middle voice offers a key to overcoming the dichotomy between activity and passivity, which often has been an entrenched subject of anthropology. In this view, possession can be considered as a happening or force that occurs in a “being” as the site of event, regardless of the will of a subject.

In the latter half of the presentation, some cases of possession in southern Ghana were introduced. She explained that in these cases, the discourse about possession represented the event as the “middle voice” situation in which the possessed was absorbed into the happening by a strong force. Prof. Ishii then pointed out that life itself can be said to be in a pathos -like “middle voice” state and suggested that it might be possible to reconsider events that have been disregarded by modernization, like “possession,” as what has connection with life in the contemporary world.

In the following discussion, questions were asked from different disciplines, for example, about “middle voice” in psychotherapy and the relationship between possession and acting, and active discussions were made.