The Book ‘Interface between Religion and Science’ Written by Hayao Kawai, of which Professor Toshio Kawai Wrote an Afterword, Has Been Republished

The book ‘Interface between Religion and Science’ written by Professor Hayao Kawai was originally published in 1986. In April 2021, it was republished in the publisher’s series, Iwanami Gendai Bunko.

The original book was a revised edition of a series of six articles from Iwanami’s magazine World (Sekai) under the title, “The Interaction between Religion and Science.” In that book, Prof. Hayao Kawai addresses “the issues brought about at the interface between religion and science” which people living in the present have no choice but to confront. He raises various questions and discusses them with episodes based on his own clinical experiences as a psychotherapist.

For the republication, Prof. Toshio Kawai has written an afterword, entitled “From Soul to Narrative.” In regard to the keyword of this book “Soul” (Tamashii in Japanese), he ruminates on the title of the first chapter “Soul” from the perspective of the interface of religion and science in psychotherapy, introducing clinical cases of Jung and Prof. Hayao Kawai.

Prof. Toshio Kawai also writes about the atmosphere of the time behind the emergence of the interface between religion and science. In his afterword, it is noted that Prof. Hayao Kawai pointed out the meaning of “nature” for the Japanese and the negative aspects that westernization has brought about for the Japanese view of nature. Prof. Toshio Kawai particularly references two chapters, “About Nature” and “About Psychotherapy,” and describes how even though it was written more than 30 years ago, the contents of the book remain thought-provoking for us especially today, as we face the ongoing environmental challenges and the COVID-19 pandemic. 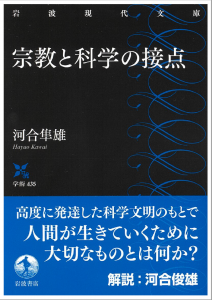