Paper by Dr. Nunoi and Prof. Yoshikawa Given an Outstanding Research Paper Award by the Japanese Psychological Association 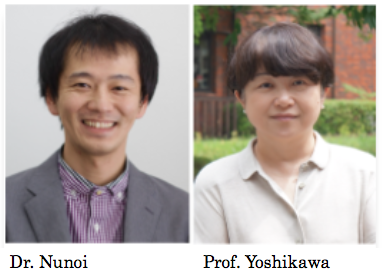 A paper entitled “The Influence of Positive or Negative Information from Facial Expressions on Preference Judgment: Examination of Quantity and Ratio” by Dr. Masato Nunoi (Seisen University) and Prof. Sakiko Yoshikawa (Director, KRC) was awarded an outstanding research paper award by the Japanese Psychological Association.
The award is given annually to papers submitted to the Japanese Journal of Psychology and the Japanese Psychological Research that have contributed greatly to the association.  From the 77 papers published in 2016, four papers (including this one) were selected for the award.
The research was given an excellent evaluation for the following reasons:
-It used cognitive psychological experiments to validate the use of facial expression stimuli on social interaction which was relevant for a wide range of psychology themes.
-The research approached the investigation using social scenarios experienced in daily life.
-The outcomes of its various experiments were consistent
-The article was clearly written and easy to understand.
Since 2015, five researchers from the Kokoro Research Center have received various awards from the association.