Kokoro Seminar Series on Thoughts was held by Professor Keishi Saeki, themed on “Contemplating ‘Modern Civilization’: Looking Back on the 20th Century”

Kokoro Seminar Series on Thoughts in the first semester of academic year 2019, organized and led by Prof. Keishi Saeki, was held in the third-floor conference room of Kyoto University’s Inamori Foundation Center on May 15th, 29th, June 12th and 26th. This seminar series has run for five years and the theme for the first half of 2019 was “Contemplating ‘Modern Civilization’: Looking Back on the 20th Century.” Prof. Saeki was in charge of the first and second seminars. 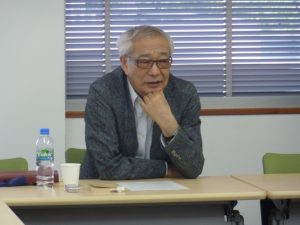 With the new Era in Japan, Reiwa, just started, Prof. Saeki began the seminar by looking back on the previous Heisei Era. An introductory overview of his lectures in the seminar was as follows:

The start of the Heisei Era coincided with the beginning of the post-Cold War period. Generally speaking, the Heisei Era was in the time when globalism (market fundamentalism), liberal democracy (universalism), and technologism (scientific rationalism) accelerated globally.

Today, the global economy is destabilized by the severe financial crisis and democracy is paralyzed by populism. On the other hand, so-called “AI revolution” is occurring, in which innovations in information technology are praised uncritically. From the viewpoint of the theory of civilization, it can be said that this is a situation of “overall nihilism.” If so, to confront it, we have to think about the cause of globalism, liberal democracy and technology. It is “modernism.”

It was in the early 20th century that the West faced the problem of “modernism” in earnest.  Given this, we first need to return that point and have a rethink on the problem, so that we can understand the situation that surrounds us. 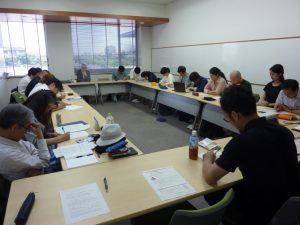 In the third and fourth sessions, guest speakers gave lectures. As the third lecturer, Hirotaka Kanazawa (The International Institute for Advanced Studies) gave a lecture entitled “The Problem of Modernity in Leo Strauss’s Political Philosophy.”

In the fourth session, Research Fellow Tomonori Shimomura lectured on “Pragmatism as a Theory of Modern Civilization.”

The audiences learned a lot from this seminar series, with one attendee commenting, “It was very intriguing. I want to participate again if I have a chance.”