International Symposium for the KRC Interdisciplinary Research Project “Pursuing Well-Being in Cultural Context: Humans, Societies, and the Environment in a Globalizing World” Was Held

On December 5th, 2021, an international symposium for the Kokoro Research Center interdisciplinary research project entitled “Pursuing Well-Being in Cultural Context: Humans, Societies, and the Environment in a Globalizing World” was held online in English. This symposium, commemorating the launch of this project, took up this theme and offered insights and discussions from the perspectives of psychology and environmental science.

After opening remarks by Prof. Toshio Kawai (Director, KRC), the following three lectures were given in English at the symposium.

Prof. Yukiko Uchida (KRC) gave the first lecture, entitled “Well-Being in Interdependent Context: Conceptualization and Social Implications from Cultural Psychology.” She began by explaining that research on human well-being has traditionally used indicators based on independent well-being, in line with the individualistic tendencies of Western societies. In contrast, Prof. Uchida pointed out that it is important to establish different indicators based on interdependent happiness in such societies as Japan and South Korea, where interdependence is more valued. She argued that collective activities centered on community-based agriculture are a key feature of these sorts of societies. At the end of the lecture, Prof. Uchida cited the importance of interdependence in countermeasures against the COVID-19 pandemic, suggesting the possibility of interdependence being a key concept for social and environmental sustainability.

Second, Prof. Bertram F. Malle (Department of Cognitive, Linguistic, and Psychological Sciences, Brown University) gave a lecture entitled “A Society’s Well-Being Depends on Norms and Their Enforcement” (joined online). According to him, social norms play a role in encouraging individuals to give priority to the interests of the community when the interests of the community and the individual conflict. The existence of these norms is essential to the prosperity of the community, he pointed out. Reviewing the history of civilization, Prof. Malle mentioned that these norms take two forms: moral blame and institutionalized punishment. Then, he expressed the view that in order to improve the well-being of society, it is important to find ways to maintain norms in a healthier manner by minimizing the enforcement of punishment while effectively using social blame against those who deviate from the norms.

The third lecture, entitled “Similarities and Differences in the Vulnerability and Resilience to Environmental Changes Between Coral Reef Ecosystems and Human Societies”, was given by Dr. Tsuyoshi Watanabe (Lecturer, Faculty of Science, Hokkaido University). He began with an introduction to the characteristics of corals, which are sensitive to environmental pollution but also resilient enough to survive various global environmental changes. Then, Dr. Watanabe explained the research methods used to clarify the past natural phenomena, such as earthquakes and tsunamis up to 500 million years ago, as well as human impact on the natural environment through surveys of coral reefs. In addition to expounding his research work, Dr. Watanabe introduced projects on Kikai Island that aim to return the results of these surveys to society through theater productions. At the conclusion of this lecture, the similarities and differences between coral reefs and human communities were noted and a comparison was made between the two, from the standpoint of how individuals and collectives support each other to survive and evolve.

After the lectures, the three speakers joined Prof. Kawai in a discussion. First, with regard to the lecture by Prof. Uchida, potential risks encompassed by interdependent happiness were discussed; the importance of being careful about tendencies such as exclusivism and slow decision-making in a societies that emphasize cooperation was emphasized. After that, Prof. Malle added an explanation about the function of social blame in maintaining norms: even in today’s society, where communication over the Internet is widespread, face-to-face contact is important in preventing excessive blame. Then, the panelists spoke about Dr. Watanabe’s theater production and the role that theater has played in society in promoting and maintaining social norms.

Videos of the symposium will be available soon on the KRC website (with subtitles in Japanese). 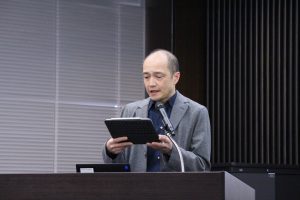 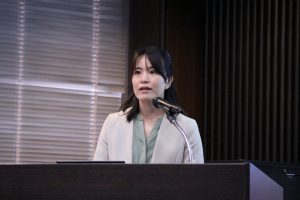 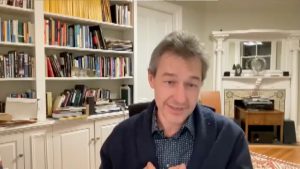 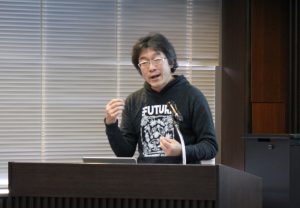 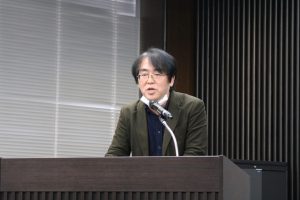 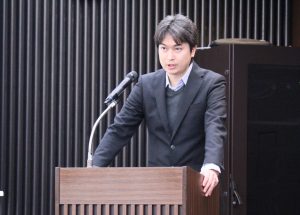