The theme of the fourth Kyoto Kokoro Initiative Symposium was “Kokoro and Artificial Mind.”

The past four themes generally intended to capture kokoro within the framework of the humanities and social sciences. On the other hand, this symposium reexamined kokoro in the progress of natural science and technology. Three researchers, who have contributed to the understanding and development of artificial intelligence or deep learning, compared artificial intelligence with human minds and attempted to examine the relationship between human beings and technology in the future, from varying perspectives.

First, Prof. Toru Nishigaki (Professor Emeritus, The University of Tokyo) gave a lecture entitled “The Future of Kokoro in the AI Era.” Considering the question, “Can a machine have a kokoro?,” he argued the polysemic and multifaceted nature of mind that human beings and other living things have, focusing particularly on the ethical issues.

According to Prof. Nishigaki, living things are unpredictable and autonomous because they have a self-creating system that creates a world of meaning by themselves. On the other hand, the autonomy that AI robots appear to have acquired is only a pseudo-result of their complexity.

He suggested that AI robots, unlike human beings who have biological autonomy, cannot be responsible for their own decisions. He gave three examples in support of his argument: autonomous driving, a surveillance-screening society, and the creation of artistic work by AI. Based on these examples, he expressed his view that when applying artificial intelligence to the actual world, it is necessary to recognize its limitations and risks, and to consider and utilize its future potential.

In the lecture, he first explained the mechanism of deep learning, an inductive artificial intelligence that learns large amounts of data, as opposed to conventional deductive artificial intelligence. He also showed examples of deep learning robots, such as robots that can fold towels, plate salads and measure liquids, etc. What makes these robots unique is that through deep learning of vast amounts of data, they can cope with situations that they have not actually learned. However, Prof. Ogata pointed out that deep learning is a black box in which the mechanisms enabling these functions can be understood only retrospectively. He also expressed the view that in future development, it is necessary to utilize deep learning with an understanding that it is a technology which contains unpredictability.

In the third lecture, Prof. Makoto Nagao (Professor Emeritus, Kyoto University) gave a lecture entitled “Building a Model of Kokoro.” He proposed a model of the human brain that is divided into three categories: intellectual function, mental function, and spiritual function. Based on this model, he examined the question of whether a machine can have a human mind. According to Prof. Nagao, the mental function is complex and therefore the most difficult for programming, because it has diverse functions such as mental processes, sensitivity, feeling and emotion. After exploring the interrelationships between the different functions and ways to program consciousness, he expressed his view that it would be possible to program a mind on a computer to some extent. Today’s development of technologies including deep learning enables programs to collect a large number of case data that show reactions associated with states of human mind, which can then be compiled into a database. He also suggested that if we could gather all the information about human intelligence or mental function etc., and infer all the possibilities that could      happen or exist, we would thus have to rethink concepts such as “free will,” as they have been thought to define human beings.

In the end, Prof. Nagahiro Minato (Provost and Executive Vice President, Kyoto University) gave      closing remarks. Specialized in medicine, he first explained how a new epidemiology was born in the history of medicine, based on the accumulation of facts rather than on the argumentation of “logic.”  According to Prof. Minato, in the medical field, deep learning that makes decisions based on data collection and the use of big data are widespread today. Thus, there is a serious need to address the question “How can we get along well with AI?”

Prof. Yoshinori Hiroi (Professor, KRC) served as the moderator of the day and there were 260 participants.

The videos of lectures and discussion will be released on the web in the near future (Japanese version only). 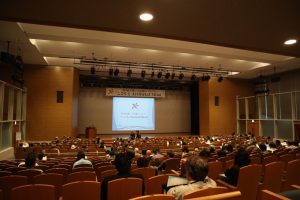 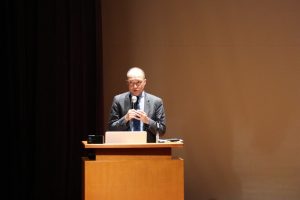 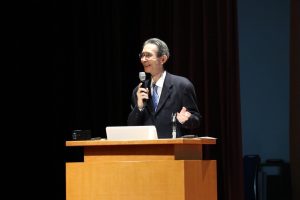 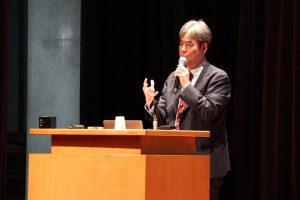 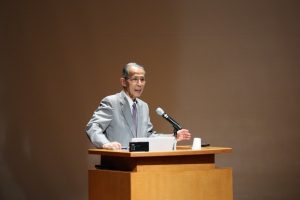 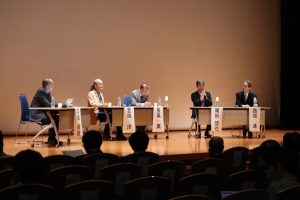 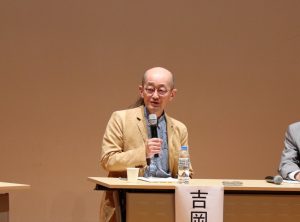 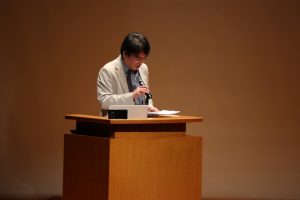 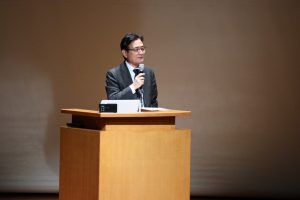 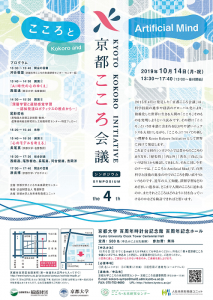